Excuse me for writing but I think it’s a shame
That we’re bombing (ENTER REGION, COUNTRY OR STATE),
Killing its children and sealing the fate
Of (COUNTRY OR STATE) and its next generation
Who’ll grow up with war as the default situation.

The likely result of our military action
Against (ENTER NATION/ETHNIC GROUP/POLITICAL FACTION)
Will be to make enemies of all who survive
And make it impossible for (COUNTRY/STATE) to thrive.
But at least we’ll have stolen their (ENTER NATURAL RESOURCE),
If you think that’s a good use for the Royal Air Force.

Or perhaps we’re just there to please (ENTER ALLY)
Or to boost (ENTER HOME COUNTRY) internationally
Thus somehow promoting enhanced foreign trade -
As in: “Oi! Buy our goods or else we’ll invade.”
I’m far from convinced that’s the best way ahead
Because people can’t shop or invest when they’re dead.

In conclusion, Sir/Madam/O Great One (NAME OF LEADER),
Before we get caught up in nationalist fever
Can we please hold our horses, then take a deep breath
And not sentence thousands of people to death?
Let’s try to make peace and goodwill our object.

And the band, henceforth group, played on.
Hauled up in a dumb waiter, Health and Safety approved,
ranting, chanting, slurring, blurring the line between sense and prejudice,
our hero, henceforth OH, rises, eyes darting right to left, left to right;
one withered hand strapped to the chair as if electric.
The end, the end is literally nigh.
Middle aged punters, male, formative years much formed
by aforesaid OH, cheer briefly, assuming theatrical ploy.
They see the rodent cheeks, the visible fucking agony,
the two microphones positioned to allow OH to fidget
and manoeuvre himself into position
of least pain whilst still vocalising, and gasp.
And the group played on.
Riff number one: bass-led,
guitars trace double-helix pattern,
its DNA of German/Lancastrian CA ancestry producing
regular and these days planned dissonance.
OH wheeled across boards by wife/kyb, b.voc.
Sober-haired hired hands, suntanned arms beneath untorn sleeves.
Planned dissonance. Seconds of eloquence as diamorphine permits.
False teeth provide added bite. Hell to pay, hell to pay for.
Where once OH paced, now slides down the chair, plants feet on boards
and rocks, fractured, enraptured, if only.
Out on the Merch desk, mirthfully self-identified
hobgoblins lay out apparel, yellow vinyl, silver discs
and check for 4G, re: Mobile Pay. Cash tins open
for punters of Luddite sensibility. Cold imperial measure
in plastic glass imbibed. The group plays on,
muffled by fire doors. Planned dissonance.

A steady stream exit. Disgruntled and/or lachrymose, pause at Merch desk
to recall lank-haired pretender, oddly delicate of feature, part-formed;
then newly-polished spokesman in the Colin/AH Wilson vein,
US wife/gtr, b.voc., unwonted solutions
to planned dissonance - cf. No Bulbs.
Both incarnations available on 180g vinyl with shirt XXL.
Riff number two: bodiddley skip, unselfconscious,
blues accidentals permitted, if accidental. Why dissonance?
Why plan? Middle-class revolting suspects fear
of naked written word. Anyone can bark, we say. OH says:
you try, see if your bark gets anywhere
near this one’s bite. That was months ago.
Later, and on the edge of an industrial estate,
briefly in opioid sleep, OH cannot hear the voice
of replicants in Schindler’s lift. Cannot ask what the fuck.
Not that it was ever any better, he might have added.
Wife/non-NHS carer pushes, clicks and holds door,
aids, unzips, unbuttons, lifts immobile arm, places dictaphone
near face for easy access to brain. Capturing all that might escape
in these last days. Damned dissonance. 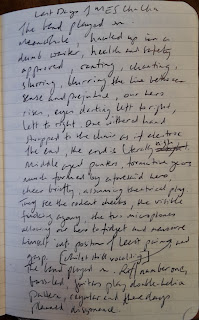 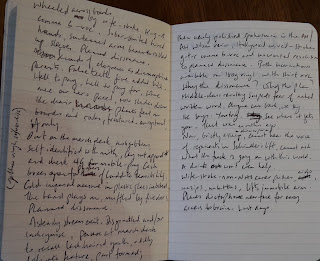 He took a long, blood-reddening draft of still, salt air. He had been shut away too long in a tiny room whose three walls and scarlet curtain he could touch at arms’ length. Deep orange crenellate clouds made a lush backdrop to the abbey ruin in the windless hour of sunset, but it was too late to be standing around watching clouds. He stretched and exhaled hugely. A little girl, passing, started at the sound and began to cry. A man bent down to comfort the child, then turned to glare. He met the father’s stare and raised an eyebrow. The father shook his head. If one of his victims still feared him outside, he must be doing something right.

There wasn’t time for any of this. He shouldered his duffel bag and half-ran towards the bridge. It was the worst part of the day for visitors; a few of them in a rush, the rest like pillar boxes, and no one going single file - except that, unusually, everyone got out of his way, even if half of them gave him filthy looks. Grateful for small mercies, he smiled at those who let him through, and as he did so, felt a naggingly familiar sensation on his bottom lip. You are kidding, he said to no one but himself, and ducked into an alley which turned into steps leading to a row of holiday cottages. In deep shadows, he removed a set of plastic fangs, and touched his face to feel the baby-soft coolness of Clown White, like touching soap - that and a hint of cherry-flavoured syrup standing in for dripping blood. He hadn’t taken any of it off, although he distinctly remembered doing so. Or was that yesterday? Well obviously it was, he thought, unless it was the day before, or God knows when before that.

No, he had been at work - not jumping out of a cupboard to frighten children, but cooking, then table-waiting - which, he thought again, is where he should be now. He checked himself for cape, syrup-soaked dress-shirt, ghoulish winkle-pickers, or any other day job accoutrements.

Now very late, he crossed the bridge and turned left. La Gourmande At The Red Lion stood bare-beamed and tasteful among the jet shops and tat parlours, like roasted sea bass on a chip shop menu. Hopes of sneaking into the kitchen unnoticed were dashed as he saw Ken outside, finishing off a cigarette.

“Hold it right there. No, on second thoughts - Christ, man, what’s that on your face? Just get inside.”

At least it saved him having to serve the public. After twenty minutes Pete/Pierre the head-waiter had to tell the other kitchen staff to grow up and shut up, as their hooting and heckling could be heard in the restaurant. After that, there were only whispers and snorts. Eventually, Ken stepped in.

“Just go and clean it off, and make sure no one sees you. The rest of you, one more word and you’re on notice, all of you.”

Baked on by two hours over a hot gas hob, it took fifteen punishing minutes of Swarfega to shift the makeup. He returned to his post red-faced and sore. Around nine o’clock, as the streets briefly quietened, there was a lull in orders before the last-chance diners filed in. Ken motioned him outside.

“Decide what your job is. I’ve been very understanding with you.”

“You’d better be, and without the...” Ken mimed blood dripping down the side of his mouth.

A series of orders arrived, sparking frantic activity, which only subsided long after the sitting, when the kitchen was cleared and cleaned in preparation for breakfast.

On leaving the restaurant by the back door, he spotted his father and Jeanne crossing the small market square beneath the old town hall. Jeanne’s ponytail swayed. They stopped and kissed. He could, with some effort, have ducked out of sight and waited for them to be on their way before crossing the square himself, but he was too tired for tact. Jeanne tensed and broke off the embrace as he passed.

“’Ello,” she said, dropping the aitch in an accent as cartoonish as her leather jacket and culottes.

“Hello Jeanne. Hello Dad. Been out?”

“Been to your place, son. Impressed by the belly pork, I must say.”

His father took a deep, self-important breath. He glanced at Jeanne, who nodded in agreement and actually licked her lips. He reddened. It alarmed him that he was so pleased that his cooking had won the approval of his father’s pouting, olive-skinned girlfriend. He wished it was because she was French and knew decent food when she tasted it.

His father pulled Jeanne even closer and touched the top of her head with his chin.

“I thought I’d treat her tonight. Didn’t I, darling? It worked out well. The top was like fine pastry - salivant, you might say. Very good indeed.”

After all the face-scrubbing earlier on, his forced smile was not just figuratively painful. A long silence ensued, broken at last by Jeanne, who said: “Well, goodnight. We shall see you soon, yes? Come for dinner, I will cook.”

So now she’s inviting people round for tea; there’s a development, he thought. He turned around briefly as he continued across the square. They were facing away from him. His father was pointing at something. He had his other hand in Jeanne’s back pocket.

How like himself, he thought miserably, to begrudge his father the pleasure of an exotic woman with a perfectly rounded bottom to grope in full view of anyone who wanted to look.

They might, like pilgrims or tourists, have been be about to climb the abbey steps; or else there was the east pier with its lapping waves and romantic sense of isolation, and still no more than a light breeze to disturb them. They were more likely standing in the middle of the square in order to allow him a head start, since all of them lived on the other side of the river, and had to cross the same small bridge to get home. He hurried onward.

By the time he had climbed the hill, to the once grand house in which he had a tiny studio flat, the fresh air had put him in better spirits. Although tired, he carried on to the end of the road, to the cliff edge. Rabbits scattered and disappeared into their warren. On the horizon, cargo ships fought the current towards the Tees. Until the morning, when he would be Dracula in clown white, fangs and a cape, and in the evening, cook.