Johnny and the Hurricanes - Rockin' Goose. From a job lot at the car boot. It rocks. It makes goose noises. Obviously a keeper.


Grace Jones - Demolition Man/Warm Leatherette. As 80s as Margaret Thatcher fronting Cameo, which is what this sounds like. Better than you'd think.


KC And The Sunshine Band - Sound Your Funky Horn. Gem. Next.


Dave Kelly - Return To Sender. Blues bands bore the pants off me, partly because they're all the same, but mostly because I've never heard one to match the Dave Kelly Band at the Sub in Cleethorpes on (squints) 19th January 1983, probably not at 8.00 pm. One of the last nights I was able to drink illegally. 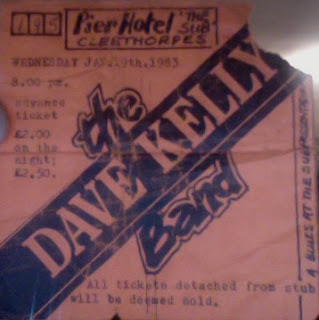 The version of Return to Sender is pretty dull, to be honest. The B-side is a good country-rock original, Dawn Surprise. I'm keeping it because I don't know where else to keep my ticket signed by DK and the (late great) sax player John Irish Earle.


Kingmaker - Eat Yourself Whole. The Wonderstuff without the wit, tunes or bounce. Ashtray.

June Kingston - Say You. I want to like this. JK used to be in the Mo-Dettes, who I saw when I was 16, and then she was the other voice on Our Lips Are Sealed. But no. Ashtray.

Kid Creole and the Coconuts - I Am. A Coati Mundi gem.

Bo Kirkland and Ruth Davies - You're Gonna Get Next To Me. Great backing track, but the he-says-she-says vocal has all the drama of an episode of The Archers. B-side is better. If you like it, look in the MIND shop on Flowergate.

General Public - General Public. One that I wanted to like, but never really did. Dave Wakeling and Ranking Roger's distinctive vocals, but without much of what made The Beat great. 80s sound. Ashtray.
https://www.youtube.com/watch?v=3a16iTwYKoc

The Gist - Love At First Sight. Another one from someone-who-used-to-be, in this case Stuart Moxham, the songwriter for the Young Marble Giants. As the Gist, he and his brother Phil (also from the YMG) had a great little instrumental on the C81 tape. The A-side is a slight but pretty song with dodgy vocals drenched in 80s sound.  The B-side (below) is better, sounding like a demo for a TV theme, written by another Moxham brother, Lewis. Not a gem but a curiosity to keep.


Girls At Our Best - Go For Gold. Oh, I remember this one now. Absolute gem. It's 80s indie day at Gem Or Ashtray. Callow middle-class female vocals delivering spiky lyrics backed by Wilko Johnson guitar (they wish) and drumkit-last-birthday drums. So many indie bands sounded like this, back then, but hardly any of them had the songs. This is sarky as you like, and catchy as hell.


Celibate Rifles & The Hard-Ons - Where The Wild Things Are EP. Early-90s punky rock, or rocky punk. I used to love this sort of thing. Now I just remember loving it. Give it six months.


Hefner - Christian Girls. Another band I saw live and then bought the single. Hard to believe quite how indie I used to be. B-side includes clumsy pedal steel. Obviously I'm keeping it.


Helen And The Horns - Freight Train. The most middle-class record in the box, possibly in human history. Sounds like a Radio 4 announcer auditioning for Kiss Me Kate. Gem.


Immaculate Fools - Immaculate Fools. A taste of the madeleine. Takes me back to somewhere I'm not sure I want to be - in a Banks's haze and Rothmans fog in the attic room of a large terraced house in Wolverhampton. Masses of acoustic guitars, plenty major 7ths and a gravelly voice that should be him out of the Psychedelic Furs but isn't. I might have seen them the same night as Helen and the Horns (in the  Wulfrun Hall - the little one behind the Civic Hall). Great record though. I'd forgotten. Gem.

Dr John: Jet Set. Primitive, concussed hip hop. This ought to be an ashtray but I'm keeping it to hear the line: "Top o'the mornin' t'ya guvnor" at my leisure.

Drugstore: Nectarine. Really liked this band when I saw them live, but it’s comically of its time (1995) - overemotional, overdramatic, over and out.

Echobelly: Insomniac. Another band I saw live in the mid-90s. Hyped to death at the time. I thought this was going to be the same as Drugstore but it’s a proper gem. Live, they sounded a lot like the Smiths, but this is their own thing. Big ambition, big chorus. Love it.

8-Storey Window: I Will. Sounds like an English Pearl Jam. I’m not that keen on the real Pearl Jam. Ashtray.

Fantastic Something: If She Doesn’t Smile (It’ll Rain). Not sure, maybe, oh I think… starts at Simon and Garfunkel and ends at the Beach Boys. Can’t argue with that. Originality isn’t everything. Gem. Instrumental version on the B-side won’t get played though.

Farmers Boys: Muck It Out. Great cover, great title, even a great sleeve note. I liked it once and I wanted to like it now, but it’s a parody of the 1980s, from the 1980s, that nowadays just sounds like a standard 1980s track. Ashtray.

Five Darrens: Beggars and Priests. Ordinary. B-side ‘Can’t Think’ is better. Keep for six months. If I don’t have a craving for mid-90s powerpop, I’ll charity shop it. Cute, the feedback at the end goes into the runout groove. Nothing on Youtube.

Floaters: Float On. My copy is pressed queasily off-centre. Singers start their verses by naming their star sign (‘Leo, and my name is Paul.’) The last guy, Larry, is louder than all the others and shouts ‘Cancer!’ just when your end-of-the-disco smooch might have been getting more arousing. Ashtray.

Chi-Lites: Homely Girl. Terrible. B-side? Not bad. I'm wavering. Nah. If you like it, it'll be in the MIND shop on Flowergate next week.

Chi-Lites: You don't have to go. Much better. Gem.


The Cigarettes: They’re Back Again, Here They Come. Skinny tie early 80s mod-punk, somewhere between the Buzzcocks and Eddie and the Hot Rods. Major chords, choppily played; vocals like a fast, squeaky Bob Dylan. Almost all indie pop used to sound like this. Framing the song inside a short piano tune was a nice touch. The cover is a mod pastiche. Looks classy. I wouldn’t buy it these days, but I’m keeping it.

The Cigarettes: Can’t Sleep At Night. Mod sensibilities gone, replaced by post-punk paranoia. Shadow of the bomb and all that. Same label as B-Movie, and with much the same sound. Another non-buyer/keeper.

Patsy Cline: A Stranger In My Arms. Classic and all that. Rinky-dink blues, beautifully sung. The voice is drowned in musical treacle though, particularly the Jordinaires style backing vocals. Don’t know how often I’m going to play this. Might have to go to the MIND shop - which I think is where I bought it. B-sides are saving it though - a small band and no backing vocals. Version of Lovesick Blues is great. I’m sold. Gem.

Coldcut: Stop This Crazy Thing. That thing with swing band riffs over an electro track; Coldcut were doing it decades ago. Corny big beat (Tarzan samples, anyone?) and a Junior Reid vocal that doesn’t say a lot, but I’m keeping it. B-side version without the vocals better still.

The Commodores: Brick House. I got some Commodores singles in a job lot. ‘Easy’ and ‘Zoom’ aren’t going anywhere, but I have no memory of ‘Brick House’. Not surprising because it’s dull. B-side is a Lionel ballad, Sweet Love. Trundles along for ages, then a huge key change, then he starts preaching. I bet he leaves the piano and starts working the audience. Not working on me, I’m afraid. Ashtray.

The Commodores: Flying High. Sounds like an advert for Laker Airways. A bit of a quote from ‘Shaft’, then back to jingle mode. I know it’s incredibly hard to make music as smooth as this, so I feel bad when I say… ashtray.

Joseph Cotton: Musicians. Plinky-plonky electro dancehall. Growling MC prattles on about black race, white race, Japanese race etc. Probably dodgy as hell but I’m not taking notice and I like it. B-side is a voicing by Don Camilo - breathless and scared, Might be a gem, definitely a keeper. Not on YouTube.

Cowboy Junkies: A Horse In The Country. Total gem. Medium paced, understated, stoical and heartbreaking. I’ll be playing this over and over again.

The Cravats: Rub Me Out. A fearsome artefact of the Thatcher era. On Crass Records. Stencils, Letraset, blurred photos, screeching paranoia, self-loathing with muffled everything except for oddly tuneful sax. A keeper, mostly for historical reasons (“Was the world as bonkers as it is now when you were a boy, daddy?” “Nearly, darling. Listen to this.”)

The Crimea: Lottery Winners On Acid. Too long and drenched in echo, but a soppy love song. B-side tries too hard to be nasty. Not sure, so I’ll keep it for now. If it’s not getting played in a few months’ time, it’s going.

My 7" singles are out of the garage and in the living room. There are plenty here that I never listen to. The charity shop awaits. It's time to play Hidden Gem Or Future Ashtray?


ABC: That Was Then But This Is Now. Hidden gem. I'm surprised. Since ABC reformed for the Mums and Dads circuit (and recorded a pretty passable Christmas song), Radio 2 has rediscovered the singles from Lexicon of Love, which will never have the freshness and serious/joke tension that they did the first time round. No one ever plays this, which has a punch to it, and isn't taking the piss.

Airport Girl: The Foolishness That We Create. Overlong twee indie. Ashtr... no, wait, it's a hidden gem. Saved by a cracking B-side "Striking out on your own" (which I can't find on Youtube).

American TV Cops: Atrocity Girl. I saw them live, aeons ago at the Princess Charlotte in Leicester, and it's a great title. Then I barely played it. Turns out it's a pop-punk gem. Best line: "The party's over, your boyfriend's dead." I can't find a video for it, so here's the song that the title refers to.


Aswad: Ways Of The Lord. Which are straight and narrow, apparently. Grit your teeth through the preaching and you'll find, as usual with Aswad, a pop-reggae gem. The dub version with fewer lyrics is better still.

Bearsuit: Drinkink. They made a great record called Hey Charlie, Hey Chuck. I think it was great anyway. John Peel played it so often when I was driving over to visit the future Mrs H that I probably just have happy associations with it. Anyway back in the early noughties (i.e. in the final days when music was hard to access) they didn't have it in Selectadisc, so I bought one of their other records instead, and it just gives me a headache. Ashtray.

Beautiful South: Song for Whoever. I never saw the Housemartins live, but did see the BS at their second or third gig when they were still raggedy and indie. They used a huge PA which collapsed and could have killed someone if the audience hadn't dived for cover. Innocent days. The meta-pop thing was interesting for five minutes, but now it's just annoying, and the BS went onto far worse things - particularly the interchangeable female singers, directly contradicting the stern message of this song. Prejudices about the BS aside, will the record be saved by the B-side? On musical terms it's a good track but the lyrics are another critique of songwriting. Can't be doing. Ashtray.

B-Movie: The Soldier Stood Alone. The single before Remembrance Day. This is nearly as good. Gem.